As we're quickly approaching the release of ARMA 2 , the third installment in Bohemia Interactive's award winning series of military PC simulations, it's a good time to clarify some things about the name and also explain why using Armed Assault 2 is wrong or why Arma is not a cheesy weird name as some English-centric souls may believe!

The meaning of Arma

Arma is originally a Latin word:

(Source: wiktionary.org, where you can also find the meaning of the word in other languages. There are quite some other meanings, for example I remember that in the Czech Army, soldiers used the word "arma"  for a small food shop usually available near their barracks. There is also a small village Arma in Kansas, but how that can be related to our game I simply don't know.)

By choosing a Latin word we are not only trying to have a name that will be very easy to pronounce and remember globally (note that in the case of our games, be it our debut title Operation Flashpoint: Cold War Crisis or the first Arma , the majority of our users are not native English speakers) but also to indicate that our game is not only different but that its roots go very deep, that we were the first to establish realistic battlefield simulation with vehicles on PC and consoles and that we are proud of this heritage. By using a Latin word, we also try to say that our approach to gaming is different, perhaps more scientific in some areas and that we are not afraid of going against the wind or completely ignoring various aspects of the common gaming culture. 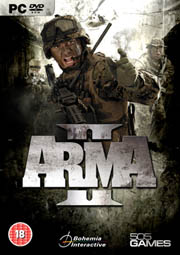 ARMA as an  acronym

Popular belief is that ArmA is simply an acronym of Armed Assault. It's in fact true as that is how the name really started with the release of Arma : Armed Assault in Europe. However, it picked up its own independent life already with the release of Arma: Combat Operations in North America. In fact, even before the European release of Armed Assault I heavily promoted Arma as a single word name to all partners but it was too much and nobody was very keen to abandon the naming cliché of the gaming industry based around "cool" combinations of English words. It is interesting how much controversy one old Latin word could cause. It felt like almost everyone prefers something along the lines of "Battleshock Operation Force 3: Thunderstorm Troops" over a simple and strong word, with a strong foundation behind it: Arma. So please, no Armed Assault 2, only Arma 2. This message goes primarily to gaming industry insiders as it is quite surprising that at least according to arma2.com's incoming visitor analysis, 92% of users coming from various search engines are searching Arma 2 or variants and only the remaining 8% are trying to find information about Armed Assault 2. But within the industry, attempts to rename the game to Armed Assault 2 are much more common - it really feels like insiders simply can't accept using a non-English name for a computer game.

Mostly people see number the 2 as indication that the game is a sequel to the first Arma. And they are quite right. However, some may remember that we were working on something called 2, a long time before we even knew that one day something like the first Arma will ever happen, when it carried a completely different name, before the 2 to later become Game 2 and finally Arma 2 now. As much as Arma 2 is really the sequel to the first Arma, it is primarily the sequel to Operation Flashpoint: Cold War Crisis, but as we have no rights to use this name, which is a registered trade mark and property of Codemasters who published it (for this other name game see our recent press release), we had to find an alternative solution. Anyway, as the two means it is a sequel to two different games, this is another reason why Armed Assault 2 is not the correct title (not to mention we have never used it in any of the official materials).

It is interesting that Arma is written in many forms.  Arma 2 looks quite nice and creates a stronger link to Armed Assault for those willing to see at least some English origins in every name. ARMA 2 or ARMA II is not bad either, esp. considering the logo we chose. I myself prefer Arma 2 the most as it is following common standards for writing names but I still like the other two variants.

So enough playing games with the name, I hope you are looking forward playing the game behind the name and I better get back to the development work itself! But of course, you are welcome to post your comments below this article to express you opinion as to why Arma 2 is a good or bad name.