Looking for a quick overview of our (public) highlights in May? You've come to the right place! Without further ado, let's kick off this Bohemia Recap:

Starting with some good news, it appears the number of new COVID-19 infections has dropped significantly in the countries where Bohemia's offices are situated. Specifically, in the Czech Republic, life is gradually returning back to normal, which means that many government restrictions have been lifted and it's deemed safe for our employees to go back to their usual workplaces. Meanwhile, things in the Netherlands are also going in the right direction, but we're still following the government's guidelines to work from home as much as possible. In Thailand, our staff was already able to return to the office since the beginning of May. All in all, we consider ourselves very fortunate given the circumstances!

We'd like to remind you that we're still hiring for over 30 positions here at Bohemia Interactive. We have openings in almost every location and department. Our HR team is happy to answer any questions you might have and also explain how we go about the hiring process during these strange times. Please visit https://careers.bohemia.net for more information.

To make games, you need more than a team of developers. That's why our latest "Meet the Bohemians" interview checked in with Bohemia's in-house lawyer, Jiří Lemberger. His efforts are instrumental when it comes to running a business and releasing games. Read the full interview to learn more about Jiří and his work as a lawyer in a games company. 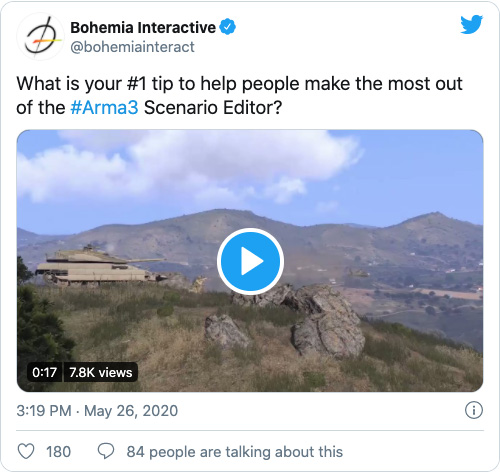 Our Vigor development team has kept their momentum going by releasing two game updates in the past month. Update 3.1 was released on the 6th of May, and introduced several new 'Titles' so you can show off your various accomplishments to other Outlanders. It also implemented a 'ping' system to mark locations for team mates, and spiced up Encounters with the new in-game 'Phone Duel' events. Under the hood, there were also lots of quality-of-life improvements. Check out this Vigor blog post for the full rundown and watch Update 3.1's overview video on YouTube.

Update 3.2 came out a bit more than a week ago, and featured some improvements to the Shelter, the aforementioned ping system, and various other aspects of Vigor. It also led to the discovery of a new species living in post-war Norway: Trolls. Follow the sound of giggling to discover their locations and add these Mementos to your collection! More information about the new additions and changes in Update 3.2 can be found here.

We really want to know you, our Vigor community, better, so that we can make more informed decisions on what to improve or add to the game. Therefore, our team prepared an open Community Survey. So far 95% of the respondents are men between the ages of 24 and 35, and the top 3 emotions they're experiencing while playing the game are: 1) alert, 2) excited, 3) tense. We'd like to hear from more of you though (especially women!), so please take a brief moment to fill in our survey. Thanks!

Now that our Brno team is going back to the office, we were also able to start live streaming Vigor again. You can watch the recordings of our previous streams in May on Vigor's Mixer channel. And, of course, Community Manager Dana "Pyrit" Geidl welcomes you to our next streams on Mixer and Twitch! 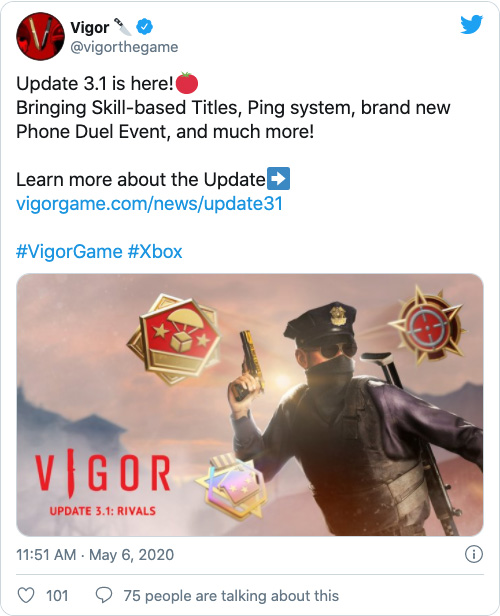 The Ylands devteam is working hard on Update 1.3, codenamed "Watery Waters". We're expecting it to be ready for release soon. To give you some idea of what to expect, Ylands' Community Manager Adam Snellgrove shared several Developer Diaries diving into the new features.

Dev Diary #127 covers the massive improvements to the current terraforming tools. Massive in the sense that you can even build something like a house by using dirt and sand only. Essentially the entire toolkit is receiving an overhaul, which involves switching to 2D brushes, which makes flattening and painting much better.

But Update 1.3 is called "Watery Waters" for a reason. We'll be expanding the seas of Ylands! Expect new underwater random encounters, scuba diving gear, and more. Read Dev Diary #128 for a fresh splash of info.

And there's more: we'll also be adding new ways to control and influence AI behavior with the Ylands Editor. For example, creators will now be able to send hordes of stampeding enemies your way (and other neat tricks)! Check out Dev Diary #129 to see how the Major General almost got trampled.

Lastly, we'll be adding a cool new compass with Update 1.3. Dev Diary #130 explains how it'll work and where to get one. 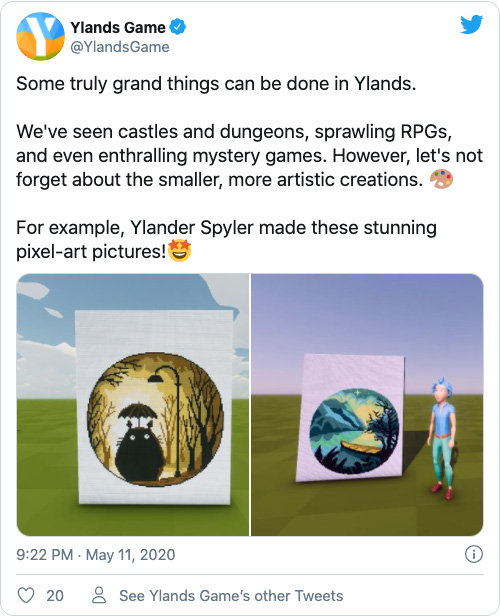 The DayZ team is making good progress with Update 1.08. We'll share more details soon, but you can expect a number of new features and assets, as well as many bug fixes and balancing tweaks. It'll be worth the wait!

In May, we've had a large influx of new DayZ survivors. This was the direct result of various sales across all platforms, but one of the biggest drivers was DayZ joining Xbox Game Pass on console. Additionally, we held a Free Weekend on Steam between May 21-25, in which well over 300,000 people participated. Welcome to Chernarus and Livonia, everyone!

Meanwhile, the #PostcardZ competition has come to an end with @Joeldinho79 taking the top spot in week 5. Thanks everyone for the amazing submissions. Be sure to follow DayZ on Twitter for intel on any future competitions. 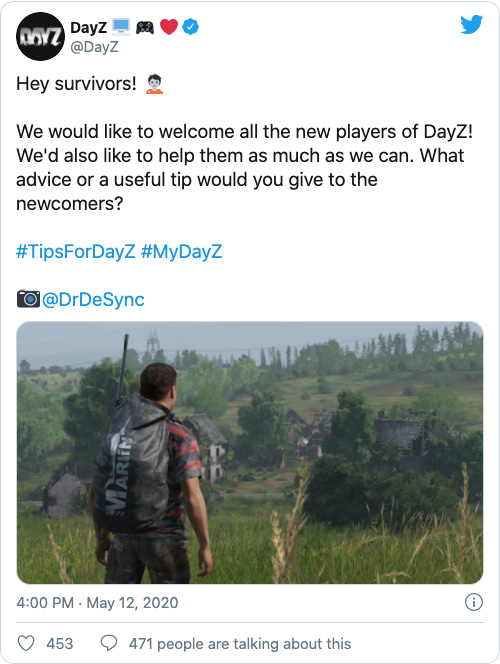 Welcome to the Arma 3 Art of War contest! On May 6th, we announced this exciting initiative, from which the winning entries will be featured in an upcoming charity DLC supporting the International Committee of the Red Cross (ICRC). You can participate in four categories (2D artwork, props, accessories, clothing). It's a great opportunity to flex your creative muscles for a good cause, grow your portfolio, and even win some great art-themed prizes. The submission deadline is July 15th, and we expect to announce the winners in September 2020. The charity DLC should then release on Steam somewhere in November with an expected price of 2.99 USD / EUR / GBP. 100% of our proceeds after tax will be donated to the ICRC. After approximately 10 months of fundraising, the DLC will become permanently free for all Arma 3 players. Learn more at https://arma3.com/artofwar.

Speaking of DLC, between May 28 and June 1st, we're celebrating the 6th anniversary of Arma 3's first premium DLC – Arma 3 Karts – by temporarily making it available for free. Make sure to visit its store page and add it to your Steam library on time. While you're there, also check out the massive discounts on the Arma 3 base game (-70%) and its DLC/expansions.

The Community Radar of Arma 3 Community Manager Niles "Nillers" George picked up on lots of activity between April and May. Check out his full COMRAD #15 report for some of the splendid™ stuff shared by our community. 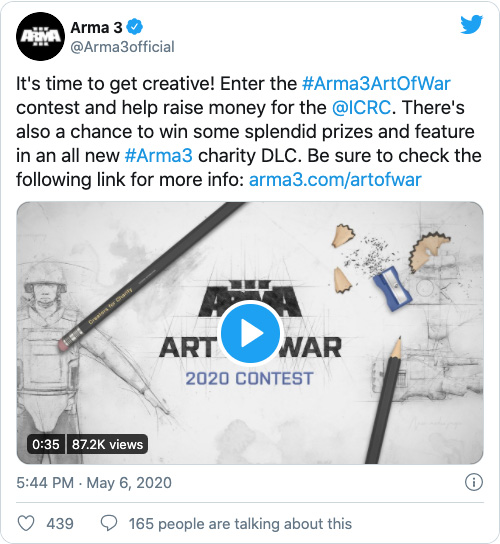 We know that many of you are excited for Mini DayZ 2. Our small development team has big ambitions for this mobile game, which becomes very apparent when you read their latest two blog posts. In the first blog, they discuss the planned combat and stealth options during raids. The second blog covers loot and the types of resources you'll need to maintain your base. As a bonus, they revealed some of the weapons that will be included in the game. 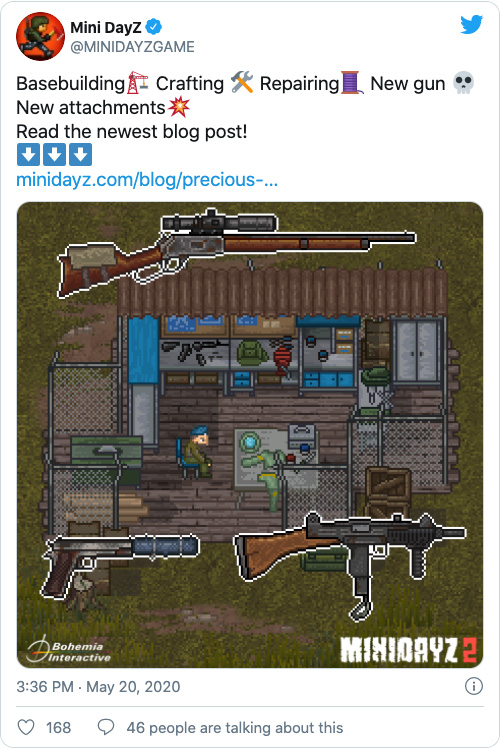 Alright, that just about covers May, which means June is right around the corner. Thanks for the interest – and if you aren't already, remember to follow us on Facebook, Twitter, Instagram, and LinkedIn. Have a great rest of the morning, day, evening, or night, wherever you are!