It was a busy month as usual at Bohemia - full of updates, interviews, competitions, and sales.

Before we begin, we felt we’d be remiss if we didn’t include a quick update regarding COVID-19. You may have already heard that Europe as a whole, including the Czech Republic, has been hit hard by a second wave. Unfortunately, a handful of our employees have also tested positive during the past month, and we’re working diligently to protect all Bohemians and prevent the virus from spreading. This includes enabling all our employees to work from home and ensuring they have everything they need to continue their jobs safely and comfortably. We went through similar challenges this past March and are confident we can once again overcome these trying times by pulling together and continuing to support each other the best we can.

On to our recap of October’s key announcements and happenings.

We’re big readers here at Bohemia and we hope you are too because we gave a number of interesting interviews in October.

First off, Creative Director Ivan Buchta gave an in-depth interview to BDinDG, which labels itself as an independent community for people in the game industry. Ivan spoke on a wide variety of topics, including the future of military sims, making realistic game mechanics, and devotion to one’s community. It’s a great read, so make sure to check it out!

Next up, Lead Designer Karel Mořický spoke with LEVEL Magazine where he answered questions about his time in the Arma community, his career at Bohemia Interactive, and his work on Arma thus far. You can find a translated version of the interview on our blog.

Last, but certainly not least, Anjanette Jianna Umali is the latest person to be included in our Meet the Bohemians series. Anjanette is Vigor’s Junior Community Manager and she discusses her life, job, and some of her favorite games. She even offers advice to anyone interested in becoming a Community Manager one day. 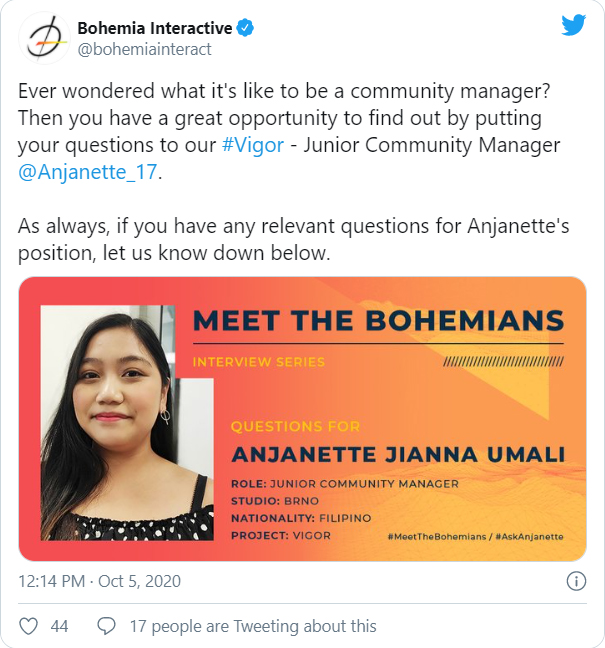 It’s been quieter than usual around the Outlands this month. That’s because we’re busy preparing for Vigor’s release on PlayStation 4 and 5. As a result, we weren’t able to release minor update 5.1. But don’t despair because Season 6 is coming next month! We’re so excited about it that we teased the inclusion of night maps, along with our official announcement on Twitter.

Speaking of social media, we reached out to the Vigor community this month and picked their brains. One of the more interesting exchanges was players’ opinions on the number of tools they should be able to carry into an encounter.

Unfortunately, there’s also some sad news to report. Vigor’s Project Lead, Petr “Pettka” Kolář, is leaving Bohemia Interactive to try something new in his career. Petr will be terribly missed, but we wish him all the best with his new endeavors. You can read his final interview with us here. 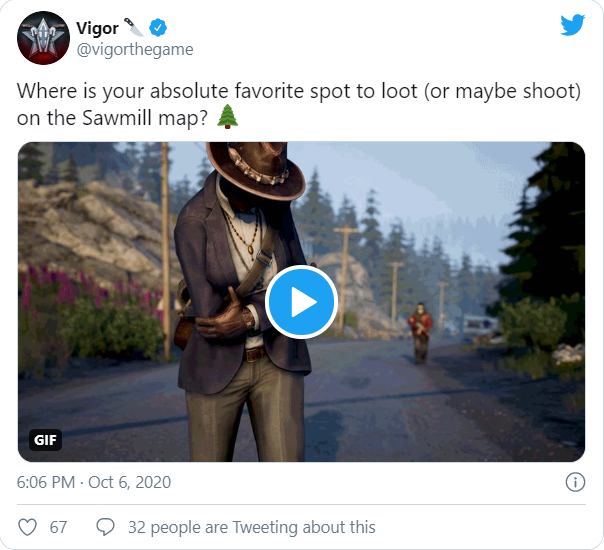 It’s been a busy month for Ylands and October has seen some very exciting developments. First off, we released update 1.4.1, which included Goodie Pack #2. Our Goodie Packs are designed to give players something to play around with while they wait for the next big update, and this one was no different. New weapon sets and armor sets were added to the game, as well as a reinvented mummy. But most excitedly, two new fearsome enemies were added: The Horus Avatar and the Anubis Avatar. Any Creator can now add them to their game and make tomb raiding pretty exciting. These enemies will also find their way into Exploration in the next update, so there’s a lot to look forward to.

But the biggest news for October in Ylands is without a doubt the launch of our very first Ylands Creators Competition. All Ylands Creators are welcome to join and if they do, they have a chance to win thousands of dollars and cool in-game merch. And what do you have to do? Download Ylands for free, open up the Editor, create whatever game you come up with, submit it to the workshop, let us know on the forums, and you're set! This really is a very exciting time for all creative Ylanders out there and we’re really looking forward to all the fabulous creations they come up with. 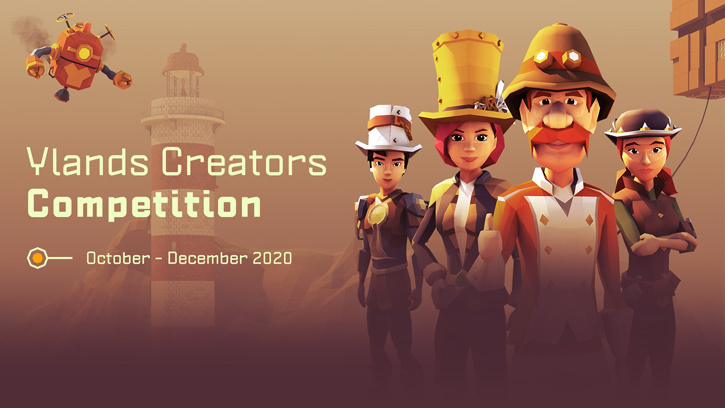 Finally, along with the launch of our Ylands Creators Competition, we also started streaming every Friday at 4 p.m. CET on Twitch. We usually have a look at Creator made games and showcase the best work out there. But we also do FAQ's, interviews, and other fun behind-the-scenes stuff, so definitely drop by and say hi! 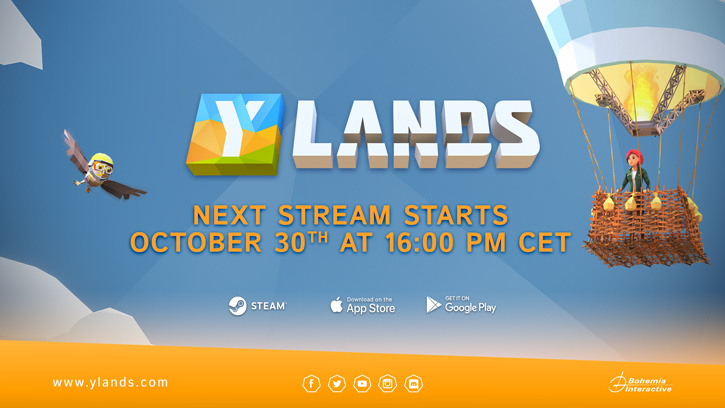 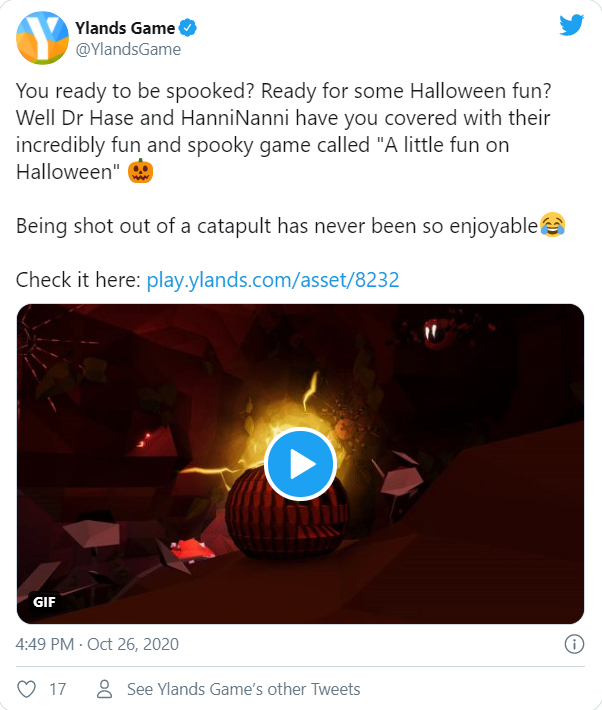 We held a base-building contest on all platforms to promote DayZ’s 1.09 update. There were lots of amazing submissions, but we managed to narrow it down to the following three winners: OVAT (PlayStation 4), Shea Miller (Xbox One), and Roy Beer (PC). Congratulations to you all!

DayZ is gearing up for its 1.10 release and is currently live on experimental servers. That means those who play on their PC or Xbox can get their hands on new content prior to the official update. Some of the main features available in the experimental version include:

Check out our full report here.

October can mean only one thing and that’s the arrival of Halloween! Bohemia Interactive will be hosting a freaky DayZ Halloween event that runs from October 28th until November 9th. All survivors playing DayZ during this time will have special access to servers offering a unique Halloween experience that includes: 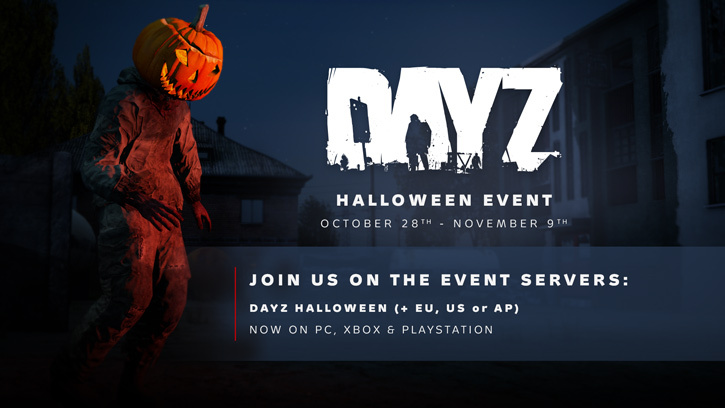 Finally, make sure to check out our sale on Sony’s Planet of Discounts, which begins on October 30th and ends on November 20th. Those of you in Europe can take advantage of our offer here, while North American bargain hunters can do so here. 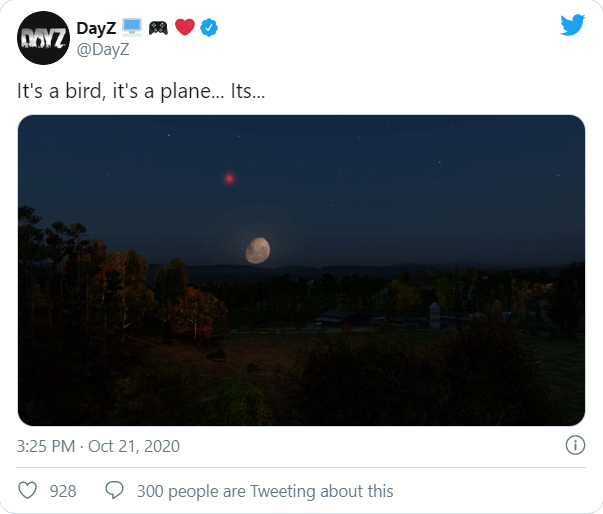 Well, folks, it happened. Seven years after our 1.00 release and dozens of updates later, we’re pleased to announce the release of update 2.00! Keep in mind that this is not a major update, nor a massive ‘v2’ overhaul of Arma 3. It’s more of a gradual progression that’s brought us to version 2.00.

Nevertheless, the update includes some cool additions like a new firing drill (which contains plenty of Easter eggs referring to previous Arma 3 releases), a black edition of the P07 pistol, new Steam Achievements, the Arma Eau de Combat bottle prop, and an arid camo variant of CTRG’s stealth gear (only available to Apex owners). Furthermore, content creators are now able to share custom compositions from the in-game editor directly to the Steam workshop. You can find a short trailer to commemorate the update here, as well as our update changelog here.

Not to be outdone, Arma 3's Community Manager Niles George prepared another Community Radar #19 blog post, in which he reports on some of the latest activities in the Arma 3 community.

And if you live or have always wanted to live in lovely Amsterdam, then today may be your lucky day. That’s because we’re looking to hire a Live Ops Engineer for Arma 3. You can find all the necessary details on our Careers page and a little more info in this Tweet. 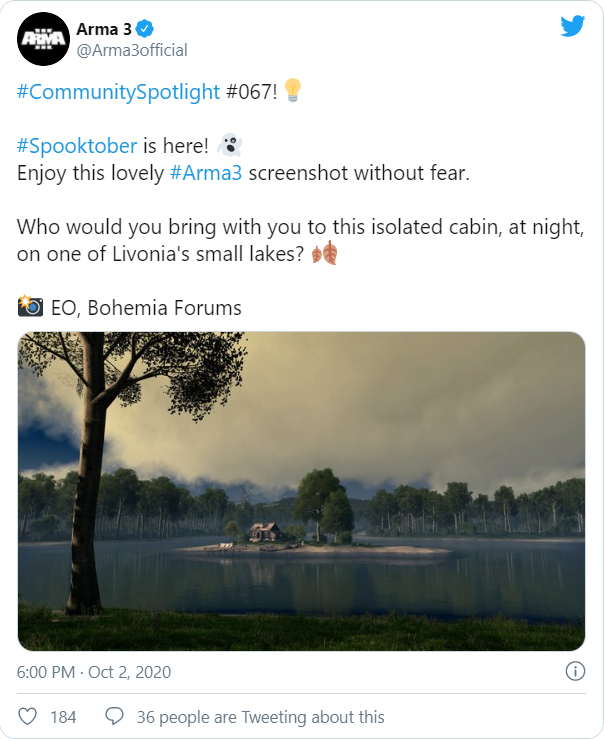 Our Mini DayZ 2 development team continues to make excellent progress. One of our most notable achievements this month is a revamped UI that now offers the option to zoom in or out while playing. This is to prevent those with bigger screens from having an unfair advantage during multiplayer. Speaking of multiplayer, we’re busy working on it at the moment, and is the primary focus of development.

There’s also a lot more information provided now when you inspect your weapon, and the Infected are now likely to make a variety of new appearances.

Finally, we incorporated a new shadow system in the game, which is the subject of this month’s top Tweet. 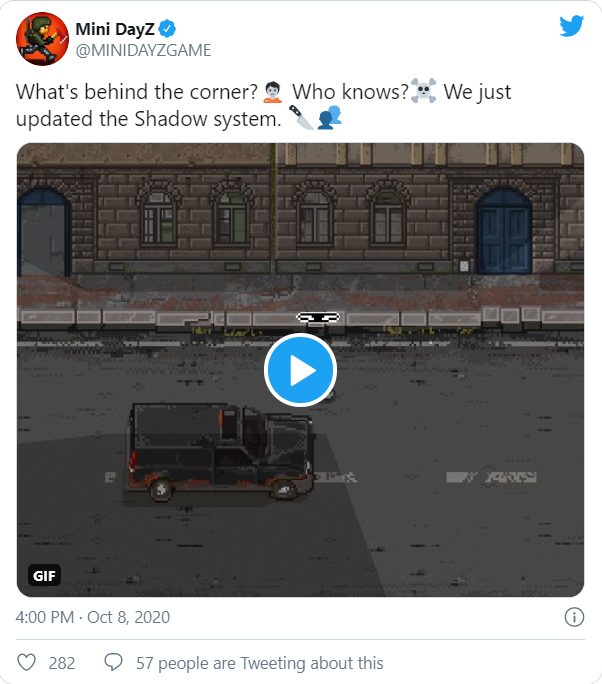 Until next time, stay safe and keep on gaming!