In September, we're launching Arma 3 across digital and retail stores worldwide with new singleplayer, multiplayer and sandbox content along with our crown jewel, the Altis terrain. You can check out the details of our launch content over
here. Our campaign, however, will be made available across 3 free episodes after release.

Supplied as free DLC to everyone who owns the game, the first episode, Survive, will be available within the first 4 weeks of launch. The Adapt and Win episodes follow in the months thereafter. Read on for our rationale behind this move and for some new details about our
release package.

Back To The Future

When Arma 3 was first announced in 2011, it followed a more 'traditional' structure: plan - implement - release - support. Since those early days, much has changed. During the course of development, it became clear to us that to deliver the best game we could - one worthy of being a true sequel in the Arma franchise - we'd have to rethink some of the initial plans.

One of the most important decisions we made was to push the game towards a public Alpha and Beta testing phase. This has been an extremely useful experience for us. It stands, without question, that now more than ever our company believes in the adopted project methodology. It cannot be overstated how much the feedback and widespread testing has helped to improve the stability of the Arma 3 platform. 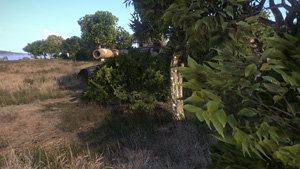 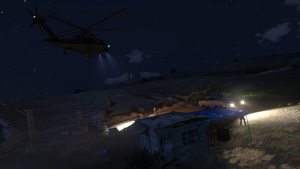 The focus upon small, quick deliverables, the advantage of rapid, targeted feedback, and the experience of putting a game out into the wild has matured the team and improved the overall quality of the game. This has translated into regular pre-release updates and the gradual refinement and extension of the platform. It's made Arma 3 a better game. Furthermore, it has energized our team, many of whom were fatigued by a lengthy, difficult project. We've all enjoyed seeing long streams of positive feedback and constructive criticism.

However, these benefits have also come at a certain cost. This was the first large project we've run this way and things weren't always perfectly executed. Making frequent - sometimes fairly significant - changes to the base game makes it a true nightmare to create, test and manage a big number of complex missions. Let's say a given designer has four scenarios under their direct control. It's not unlikely that, after finishing a quick iteration of all four, the first couple are already broken. Assets are changed, environment locations get updated, bugs pop up, AI tweaks result in different behaviour, placeholder content is finalized. The list goes on and on.

This, of course, is a challenge that faces most game developers; however, the more fundamental these changes are, and the later that the root causes are identified, the harder it gets to deal with them. Developing a good campaign on a settled platform is far more effective. In the past, Arma has garnered something of a reputation for instability. We've been single-minded in our pursuit of real improvements in this area. In the context of this development, our Showcases have proven themselves to be the most robust content to develop, publish and maintain. These focused scenarios set a benchmark for the diverse range of features in Arma 3. They enable us to share with players real improvements like fluid animations, new radio protocol, improved lighting, upgraded sound engine, etc., through challenging, open gameplay.

Combined Arms, Tanks, Gunships, SCUBA, Night, Supports, Commanding, Infantry, Armed Assault, Helicopters, Drones, Vehicles, when all these things come together - and when players aren't held back by silly bugs - we think it's an experience unlike any other. We've chosen to invest in these scenarios, as well as in the various multiplayer modes, the huge sandbox of weapons, vehicles, factions - not forgetting the Challenges, Faction Showcases - and, of course our Editor, which unlocks the full potential of the mothership: Altis.

Meanwhile, we've been empowered to further develop key pillars of the game. We've made refinements to the AI, important fixes to the terrain, extensions to the platform of weapons and vehicles, etc., without fear of breaking something like a campaign. Just releasing the Alpha and Beta without making frequent updates would have been pointless. Instead, we've tried to put some real effort into a two-weekly patching cycle and daily builds on the Development Branch. Our pipelines were evolving with us as we went, meaning things like automated changelogs were not ready straight away - costing manual labour every update. Going through these things now will benefit the release, post-release support and future projects alike.

Set alongside the openness of the platform - the potential to make and share custom content, itself already being created and refined - we hope Arma 3's release sets a new standard of quality for us, and marks a step in the right direction towards fulfilling the real potential that our series has long threatened to deliver.

This is not to say that the project has been without issue. Arma 3 started life with a very different team and a very different scope and direction. Since 2012, we've seen the number of developers working on the game double, absorbing the Mníšek studio and bringing in a bunch of talented new hires in key positions across all 3 studios. And, later on in the year, we found ourselves in a position to conduct a thorough project review, which fundamentally re-evaluated the direction that the project was taking.

This turnaround was made no easier by some of the unpredictable events of last year. The uncertainty that was produced and the impact it's had - on both a professional and personal level - cannot be emphasised enough. It made a tough time exponentially more difficult. In the end, this process culminated in the successful release of the Arma 3 Alpha, and, despite some tough, pragmatic choices, we believe that it's put us in a much better long-term position.

Furthermore, the project plans, which crystallised last October, did not sufficiently take into account the great impact that public development would have in parallel to our internal milestones. More time went into directly supporting the Alpha and Beta than was planned, leaving less attention for the full game content. While it pushed our relatively small team's resources further, we stiill fully believe in the early access release strategy, and the benefits it has wrought.

So why deliver the campaign after release? Simply put: it's not ready. There are several factors - some of which we've touched on above - that have made it infeasible for us to finish our work to the level of quality we'd be happy with for this release. Why make it at all? Well, we like campaigns and we simply want to make and play them. We also know that we owe it to our community, who've backed us from the start. To those eagerly anticipating the experience, we sincerely apologize for the additional wait. While we would have loved to include the campaign at launch, we could not accept compromising on its quality.

How has it taken so long, then? As mentioned above, the project has experienced fundamental changes in terms of its vision, scope, scale, and setting. Put frankly, almost two years of work related to the original direction was binned. Through a process of playing, evaluating, and honest reflection, we found that the original plan was not headed towards what we expected from a legitimate Arma sequel. The changes that were necessary to put the project back on track have been costly and difficult but, ultimately, we feel, worthwhile.

As we approach the end of Beta, we are also faced with various things that lock us in creatively. One such thing is localization. The game needs to be translated for many regions of the world and that requires finalized source texts. Similarly, doing voice acting takes time. We can't wait and rush things in the last moments before release. Finally, games need to be rated in many markets, for which rating agencies need a solid and near-final playable build well ahead of release. Effectively this all means the campaign would have had to have been finished roughly two months ahead of its launch. It was not. 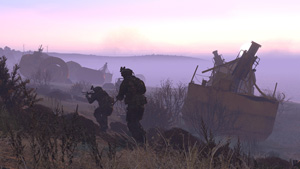 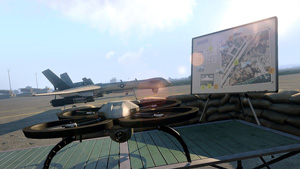 Even though it differs from the original planned launch strategy, we have full confidence in Arma 3’s release package. When the game deploys, players will be met with a set of 12 diverse Showcases and 3 Faction Showcases, 10 Challenges, 9 multiplayer scenarios across 4 unique modes. Together with a huge sandbox of weapons and vehicles, an editor to create and share custom missions, and the enormous canvases of Altis and Stratis upon which to make them.

Looking at the game from the perspective of players joining us at launch - even in the brief absence of the campaign - there's a big variety of out-of-the-box singleplayer content. For players that have already supported us in our pre-release development, we believe that commissioning the new Altis-based Showcases, adding new Challenges and multiplayer modes, expanding the sandbox, and unleashing Altis itself, means a wealth of great new experiences await them, too.

We think of the main release as a platform - the beginning of a long lifetime for the game. A platform that will grow with official content additions, fixes, improvements, as well as with user-generated content. Veterans of the Arma series know that previous games have matured and become better with time. Our team is committed to supporting Arma 3, and we already have lots of post-release plans. Your feedback has and will continue to shape prioritization. Looking back to 2012, reflecting upon the progress the game has since made, evidenced by the success of the Alpha and Beta programmes, we're proud of the upcoming release. It's a product of our team's hard work and of the unwavering support of our dedicated community.

Thanks for keeping the faith and see you on the frontlines!