Welcome to the February edition of Bohemia Recap! There’s plenty of news to share this time around, including new updates, releases, and goodie packs. Oh, and there was a certain partnership agreement that wound up taking the media by storm as well.

So let’s not waste any time and get straight to the month’s key news and events!

Our biggest news by far this month was our partnership agreement with Tencent Holdings. The well-known tech conglomerate acquired a minority stake in our studio, solidifying a relationship that will enable us to introduce our games to the vast Chinese market. Included in the deal is the fact that Bohemia Interactive will remain staunchly independent and retain its current management team. You can read more about our new partnership on our Developer’s Blog.

The agreement was spearheaded by our CEO Marek Španěl, who also found time to participate in our popular Meet the Bohemians interview series. Read all about the man behind the studio here.

And finally, as we begin a new chapter in Bohemia Interactive’s story – one powered by our new Enfusion technology – we decided to invite Czech journalist Pavel Skoták to cover our 21-year history in a series of in-depth articles. We hope you enjoy his first entry, “Built from Scratch”, and recommend following what promises to be an entertaining and rather enlightening series. 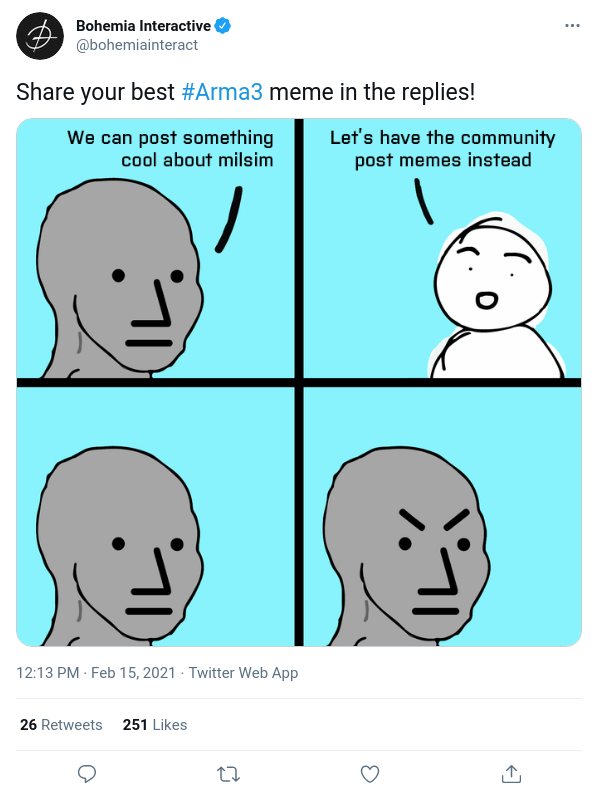 It was a busy and productive month in the Outlands, one that actually began at the tail end of January when our partners released not one, or two, but three previews of our upcoming release, Season 7: Mercenaries. The actual release followed a few days later and was accompanied by a trailer, blog post, and announcement on Xbox Wire. For those of you who don’t know, we addressed your numerous requests for more military cosmetics, which include gas masks, balaklavas, camo face paint, the La Chieve 12 shotgun, and M60E3 machine gun.

There were, however, a few issues that popped up with Season 7, which we addressed here. While we’re on the subject, we also resolved some past issues involving Game Pass and Battle Pass level 75.

Moving on, we took a look back at the year that was and wished our beloved Outlanders a very Happy Valentine’s Day. We also released a hotfix (no more bluescreens & crashes!) for those who prefer to play Vigor on PlayStation.

And finally, we asked you a ton of questions regarding Vigor’s new features and gathered loads of valuable feedback. We want to thank you all for your inspiring thoughts and ideas and hope you’ll keep them coming! 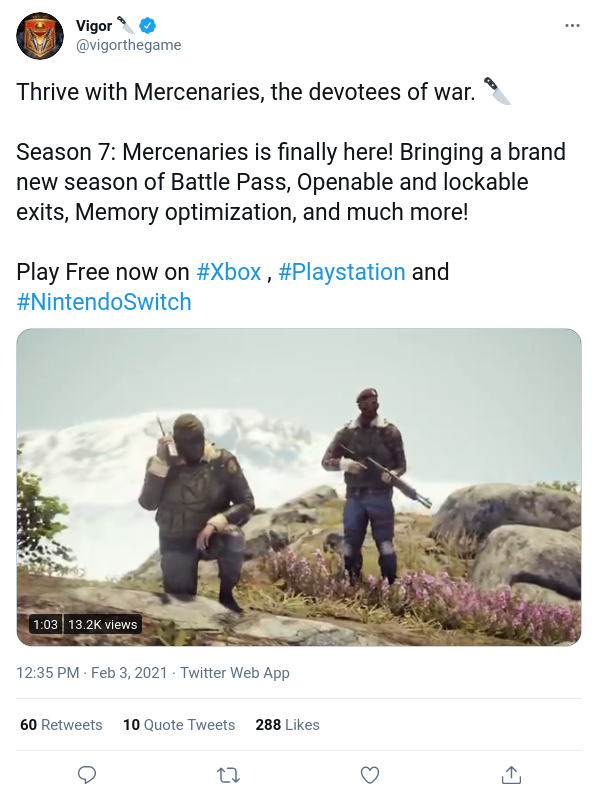 Our most important news in February centers around the release of Update 1.5.1 and corresponding Goodie Pack #3. The pack features all kinds of cool stuff, including new gear, new dangers, a Junk Ship, and a new culture. Make sure to check out our dev diary for the full rundown.

Unfortunately, we also have some sad news to report. Our Community Manager, Adam ‘Major General’ Snellgrove, has left Ylands in pursuit of new adventures. Needless to say, he will be sorely missed. Adam left an indelible impression on the community, as well one final official post, which you can read here. We are actively searching for a new Community Manager and hope to find a worthy successor soon. Have a look at the kind of person we’d love to join our team and get in touch if you think you’re the right fit!

On a closing note, we’re hard at work on creating a bigger and better experience for all Ylanders. One of the things we’re excited about is the future of the barrier, which we expect will give you far more control over your games. There are also some special ylands and global leaderboards in the works, which players and creators alike will definitely want to learn more about. 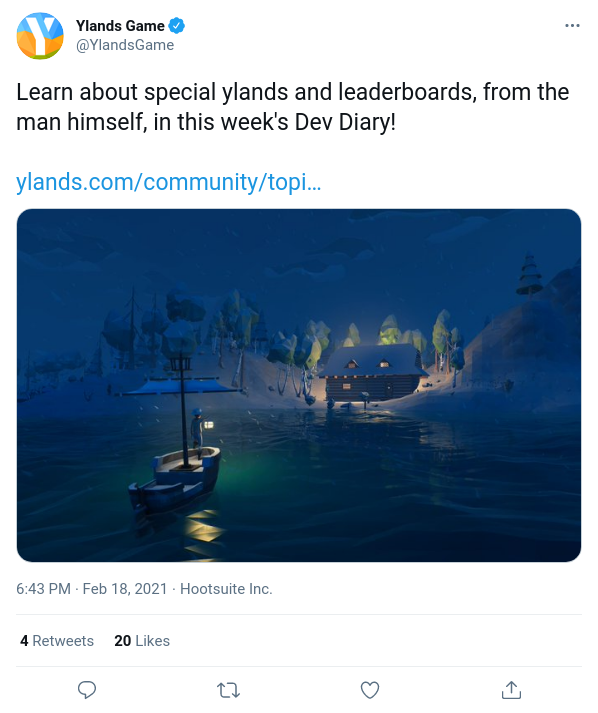 The new year’s first update is here! While Update 1.11 isn’t focused on any significant additions to DayZ, it does feature a number of bug fixes and much improved game stability. Make sure to check out our trailer, blog post, and change log for both PC and console for all the details. We also had a complete wipe on all official servers to go along with the update, which will serve as a solid foundation for us to monitor any changes made with previous economy updates.

In other news, we wished all you lovely Survivors a Happy Valentine’s Day, as well as a Happy Year of the Ox.

Last, but certainly not least, we’re thrilled to announce that DayZ is now on TikTok! So fire up your phone and have a look at the short-form content we’ve started creating! 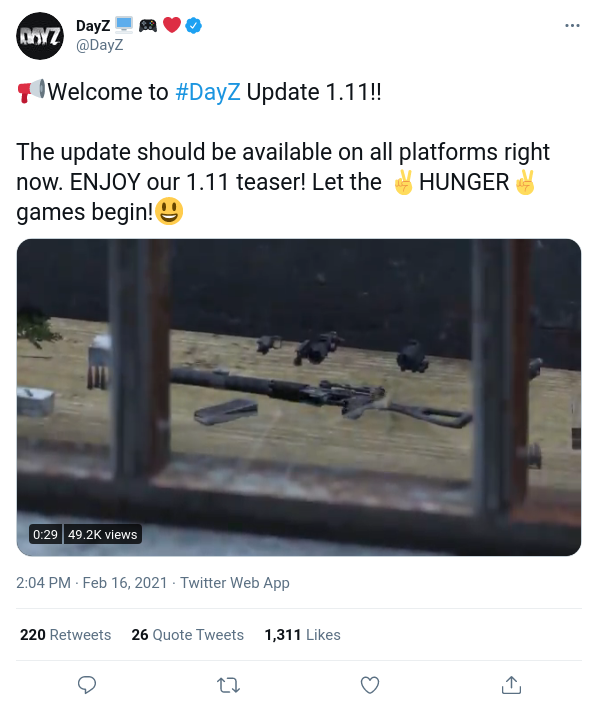 February marked the month of giving thanks to the release of the Arma 3 Art of War Charity Pack. The DLC celebrates community artwork, raises awareness regarding International Humanitarian Law, and offers players a new single player combat scenario, along with some fresh new assets.

Most importantly, however, all of our proceeds from the pack (after tax) will be donated to the International Committee of the Red Cross. The fundraising period will run until the end of 2021, after which the DLC will be available for free to all Arma 3 players. You can purchase the Charity Pack now on Steam, and check out our trailer, news article, and changelog for more information. 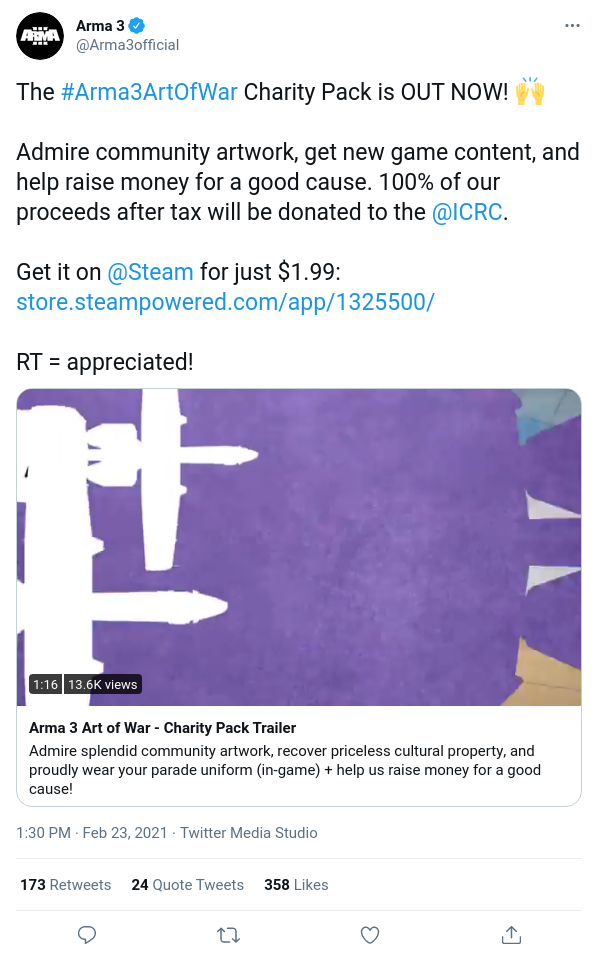 Our first order of business this month was to release a balance patch for our geo-beta and that’s exactly what we did. Aside from a ton of bug fixes, we focused on making the start of the game a bit easier, added a Raid mini-map, and introduced new textures for roads, as well as a new warehouse building. Get all caught up on everything that’s new by reading our informative blog post.

We also confirmed that the open beta for Mini DayZ 2 will most likely arrive at the end of March on iOS and Android and be available all around the world (except for China). The game will also include language options for English, French, Italian, German, Spanish, Polish, Czech, Russian, Chinese, and Brazilian Portuguese. 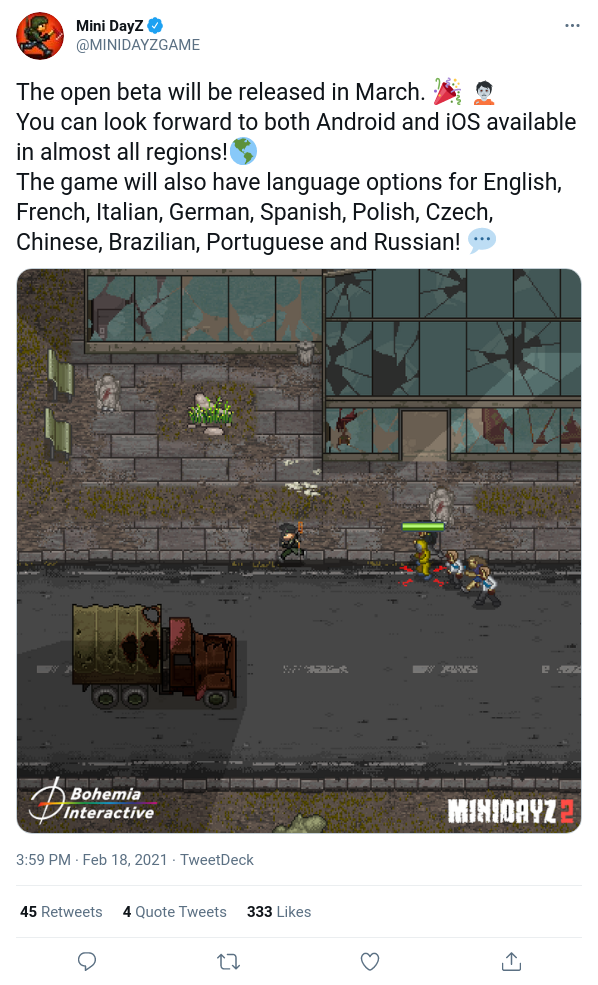