Ten years ago, a game was released: Operation Flashpoint: Cold War Crisis. It completely changed the lives not only of one small and dedicated team of independent developers, but also the lives of many hundreds of thousands of gamers around the world. We would like to take this opportunity not only to thank you for all these great years, but also to shed some more light on various events from the past and to explain more about our plans for the coming years.

in the years immediately following the original release of Operation Flashpoint, our focus was based on riding on the wave of its success. Operation Flashpoint: Resistance was released one year later and to many of Bohemia's developers it is their favourite game to play to date. Sometimes, though, I feel we made a mistake not taking this even further, especially on the multiplayer and engine side, and by not extending it into a full-blown sequel. However, we didn't want to create a sequel at all back then. Instead, we wanted to do something completely different: an RPG Wild West game. Aside from prototyping it, we started numerous other ventures simultaneously: OFP: Elite for Xbox, VBS1, OFP2 in Vietnam and several other projects that did not come to fruition, but elements of which fed directly into later games. VBS1 was struggling to establish itself within the serious military domain (where its biggest rival was, surprisingly, a heavily modified Operation Flashpoint known as DARWARS Ambush!).

OFP: Elite took many years to complete and was not only a major technical challenge but also a commercial problem for Bohemia Interactive, amidst a controversial critical reception with reviews ranging from 1/10 to 9/10. Most importantly it was completely overshadowed by the launch of the Xbox 360 at the same time. For our development team this project forced us to handle various things differently, especially to be more organized and, in the end, this was beneficial for the growth of the company. Developing for a console means that there are many more regulations and compliance procedures. These can cause delays on the one hand, but forced us to streamline, polish and optimize on the other hand. We were also able to identify our technology's bottlenecks when applied to a fixed (and often less powerful than PC) hardware platform. These were all lessons we try to bring forward with us into the future.

Five years ago, Bohemia Interactive was almost completely exhausted, both morally and financially. Sales of the original OFP were slowing down (still, it's highly notable that the game has managed to live for so long), and new developments were not going too well. Our relationship with Codemasters, the former publisher, was utterly broken. Various legal and contractual problems that made it difficult to establish a relationship with a new publisher. At the same time, Bohemia Interactive had been trying to put together the extremely overambitious Game 2; a total military life simulator with three extremely large and fully destructible environments (Chernarus, Takistan and Basta), very detailed vegetation and complex physical simulation powered by ODE. This was simply too much to handle. The decision was made to take as much of the new engine improvements as possible from OFP: Elite for Xbox (most notably the streaming of data into memory and pixel shaders) and create a game partly based on revamped Cold War Crisis assets. The result is now known as Arma (initially titled OFP Rearmed). Unlike “Game 2”, this would have to be created relatively quickly, within a budget and most importantly on time. A follow up to VBS1 (so far only a moderate success), powered by a heavily modified Arma 1 engine was also in the making by the growing Bohemia Interactive Australia team, composed of some of the very finest and talented members of the OFP community.

The Arma 1 release was not in any way smooth and the game was somewhat uninspired in various ways. Still, it provided a great platform for the future and kept our games alive. It has also allowed us to start building our very own Arma series and approach something we felt could be close to the original ambitions of “Game 2”, but sill would be something feasible to manage. We titled this project Arma 2. In parallel with this, we started a close cooperation with a second studio Black Element Software, working on Queen's Gambit, a datadisk for Arma 1. Also, a third studio Altar Games, started to contribute heavily to Arma 2's development, which was carried out by two development teams working from two locations in parallel.

The PC gaming market kept changing, with a clear shift towards digital distribution, and Bohemia Interactive has tried as hard as possible to be able to benefit from this trend. In order to achieve this, it had to take on more and more of a publisher's role. This again required us to learn many new things. The effort was also partly fueled by the announcement of another game targeting our very own community, known as Operation Flashpoint 2. In my memory this will remain as a full blown conflict. Some of it was on-going behind the office walls of the two companies; some of it was more public. Luckily, VBS2 was already kicking strong, and this only fueled our dedication to Arma 2 development. However, at some stages it probably also led us to try to push comprehensive new features and improvements, which again led into a bumpy release initially. This "war" probably does not have any real winners but we feel like we managed to retain the hearts and minds of the majority of our dedicated user community which matters a great deal to us.

With all these lessons learned and digital distribution allowing us to be more flexible with smaller releases, we wanted to find a suitable model to keep updating and improving the Arma 2 core, which we felt still had a good headroom to grow. As a result, the Operation Arrowhead expansion and its DLCs British Armed Forces and Private Military Company were created. DLCs are not a concept loved by many; however, we tried to create DLCs that are more akin to full blown addons, whilst still developed within a relatively short time frame to give our users a fresh new experience within the massive core sandbox.

Now, we are at the end of one period and it provides a good opportunity to give you a direct update as to our views and plans. First of all, we would like to assure you that we are still fully dedicated to the game world we created and fully dedicated to you, the community that assembled around the game. Your passion and creativity never ceases to surprise and astonish us and your passion keeps driving us forward. We are very closely trying to listen to the heartbeat of the community through our forums, all the great community sites and other social channels beside. The fact we are not able to fix all problems instantly and that some things take a lot of time, does not mean we’re not trying to do our best. However, we had to also learn to operate as a business in a sense and we need to carefully align our plans to keep the company operating well. We are again at a stage when we are working on numerous announced and secret projects, alongside supporting all the many released titles that are still played by our users. It's difficult but there is no other way for us. Unlike in the early years of the massive success of the original OFP, we rely on sales of new projects in order to sustain the company. Part of the reason is that the original game was made by a team of eight, whilst something of Arma 2's scale required a team nearly ten times bigger. So unless we focus on much smaller games there is no way we can sustain development unless we are able to work on multiple projects in parallel.

Mod to Be or Not to Be

From the early days we always thought that OFP: CWC may become a very nice tool for user made content and we felt the visual editor and user made scenarios are a great way to go. Anyway, from releasing the demo for OFP: CWC we had seen so many user modifications, quickly made even without a visual editor that we started to see a potential even beyond it.

The proprietary scripting language was intended to just do camera-based cutscenes. Since then it has expanded into a vast library of commands, allowing creative designers to turn the game into whatever they like. 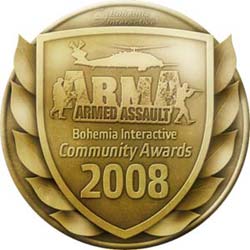 The concept of add-ons, packaged into PBO files, has been incredibly useful. Not just in that our games are now filled with data packaged in add-ons, but also the community has released a mind-boggling amount. We initially used it for our own free addons available through game patches, but later more and more effort had been put into making this into a viable means for user made content as well. We still feel the relationship between us and the community has been extremely productive and collaborative and without this Arma would never be what it is now. We are very dedicated not only to keeping the same possibilities of modding and community sharing but also to find ways to improve it further.

Similarly, as with Arma 1 content, we are going to release Arma 2 content in source form to make it easy to create and distribute various user based addons for our games based on it.

The future weeks and months are going to be loaded with many different releases. With Arma 2 Free we are trying to breathe more life into the original Arma 2, as well as to seek out new players that could not buy and play the full commercial Arma 2 or Arrowhead for some reason. The beauty in it is that it’s very compatible with various user made missions and even campaigns, plus it’s designed to be compatible with vanilla Arma 2 in multiplayer.

We’re also introducing a sharper focus with Take On Helicopters. Unlike our Arma games, this game in a sense takes on a narrower, yet much deeper, scope. We hope to use it as a building platform to add even deeper vehicle simulation aspects to the Arma experience. Finally, we can make a game where the goal is not to shoot someone! As we want our community to be involved early, we’re planning to release a Take On Helicopters Community Preview very soon. It should give you a better idea of where we are heading, but also allow some of the extremely talented addon makers to start crafting addons tailored for these more advanced simulation aspects that will be part of our future releases.

Arma 2: Firing Range is going to tap into the world of mobile devices and web browser games. It’s partially an experiment, but seeing Arma 2 graphics and firing all of its weapons on smartphone or tablet definitely makes it worthwhile.

There is also Carrier Command: Gaea Mission which has been under development for many years now. It’s not only a tribute to one great game that was way ahead of its time when launched in 1988, but it’s also our attempt to create a more mainstream game for all major platforms. As we feel the gaming technology is now very solid and the gameplay is finally at the stage we originally envisaged, we feel confident the game will see a release sometime next year.

And at the heart of all our efforts is Arma III, but more on that later!

For now, farewell and good bye to Operation Flashpoint. Long live Arma. It has been an exciting and busy ten years, and we hope to see you around even one decade later.

On behalf of Bohemia Interactive