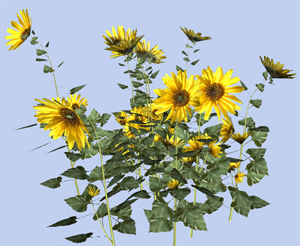 So what's the progress since the last blog entry?

All generated vegetation is nearly done, after we totally reworked the scripts for conifer trees for better results. There will just be a final color tuning on the vegetation. You can see some ingame screenshots showing how it looks now. There are some small issues with multiplication of sections when trees are blended, problem is in some trunk lightmaps that are not shared through LODs, something easy to fix. But the main focus is now on special vegetation LODs. We also found problems with LOD switching on bushes, because LODs were too different, we reworked the algorithm for choosing representative polyplanes and made this algorithm more controllable and flexible, there was also another bug, Linda never inspected the whole branch when finding topology similarity- this was fixed. This bug was not specific just for bushes, but bushes as more chaotic structures then trees, were much more affected by this problem.

Firstly I’d like to clarify that unfortunately for personal reasons (boring stuff like getting married, honeymooning, moving to a new country etc!) Alex Biesse was unable to complete her interview, which of course happens sometimes. So Alex, bon voyage and congratulations on the marriage!

The man who broke a thousand hair brushes.

Now, to ease the disappointment of not being able to discover the inner workings of a fine French woman, I bring to you, a somewhat fine Dutch man! That’s right, the 2nd ever interviewee (eventually!) becomes Jerry Hopper of the flat country known as The Netherlands (or Holland as some know it best).

Many words have been spoken about how important the community is as a whole, the talent that the community collectively brings forth, to provide us with many things that keep ArmA alive, whether that be addons, mods, missions, campaigns, squads, websites or simply just some damn fine conversations on the various medium out there.

Most of the time it would be unfair to pick out one or two examples of the best that the community has to offer, but then as they say, life's not fair! To that end we can officially announce the first stage in the 2008 Community Awards, these awards will be a chance for the community to nominate and then vote for their favourites in a number of areas (see below), The category winners will each receive prizes and to hopefully ensure that as many people nominate/vote as possible there will also be 5 randomly awarded prizes of ArmA posters, the posters will be given to 5 names of people who nominated/voted during the awards process as drawn from a hat

A full list of the prizes on offer will be announced shortly.