We've entered the summer (holiday) period, which means some of our Bohemians have started to take their well-deserved breaks. As a result, there were perhaps fewer announcements and releases than usual, making this a slightly lighter Bohemia Recap as a result. Nonetheless, there's still plenty that did happen, so let's go and take a look at our highlights in July:

While many of us are working on our Enfusion-powered future (Enfusion is Bohemia's new proprietary engine technology), our Publishing team has been collaborating with a team of dedicated community developers to prepare a new update for a title from the past: Original War – a game that entered our back catalog after we acquired its Czech developer Altar Interactive in 2010. Update 3.0 for this much beloved, (cult-)classic, RTS game, implements a new renderer for better compatibility with modern hardware/software, and offers an improved UI with Lua scripting support for greater flexibility and modding options. The full update changelog is available on Steam.

Speaking of our back catalog, we're also pleased to report that four of our older titles have made their way back to one of the most customer-friendly digital distribution platforms in PC gaming: GOG.com. You can now purchase Arma: Cold War Assault (originally titled "Operation Flashpoint: Cold War Crisis"), Arma: Gold Edition, UFO: Afterlight, and Original War (which includes the aforementioned 3.0 update), and store them however you want – without any form of DRM applied.

We've also continued our informal employee interview series, Meet The Bohemians. This time we invited Vigor Marketing & PR Coordinator, Filip Šťastný, who shares with us his passionate love for coffee, dog/cat-hybrid tattoos, and working in the games industry. Be sure to add the full interview to your reading list. 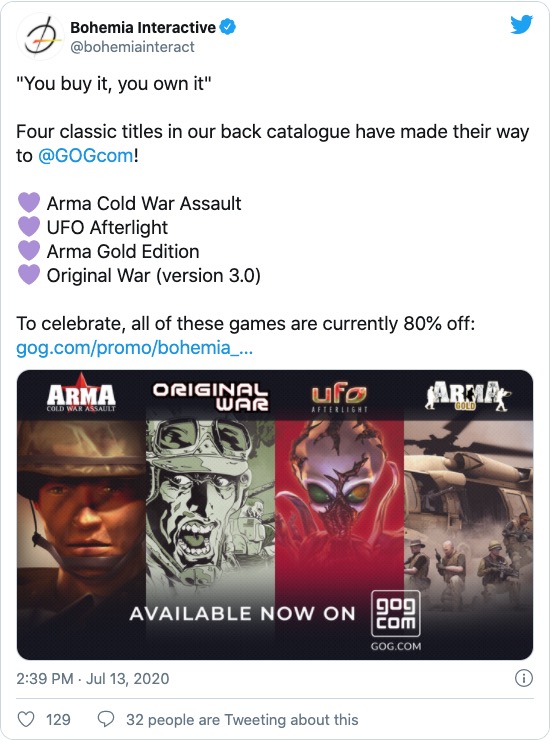 It's official; on July 8th we've released the first ever Bohemia game on a Nintendo platform. With Vigor arriving on Nintendo Switch, it also means that the looter shooter is no longer an Xbox-exclusive. While, just like the Xbox One version, Vigor on Switch will eventually become free-to-play, you can now get it by purchasing the Founder's Pack on the Nintendo eShop. By making it available in this way we can make sure the game will be in the very best state it can be before releasing it to the Switch masses. And to reward our Founders, their early access to the game also comes with many cosmetic items and Crowns (the in-game premium currency). By the way, the version of Vigor on Switch is the same as the version on Xbox (Season 4), and we're also supporting cross-play so that matchmaking times are kept as short as possible. You can learn more about the Switch release on the Vigor website – and do check out the fantastic Nintendo Switch release trailer!

In July we also had the honor of donating Bohemia's cut from the sales of the Vigor Stay Safe Charity Pack to the Brno University Hospital. On behalf of the entire Vigor community, Project Lead Petr "Pettka" Kolář and Marketing Manager Dominik Jícha personally handed a check of 250,000 Czech crowns (11,000 USD) to the university's Director. Since the hospital has had their hands full with the COVID-19 pandemic, while also having to deal with attacks from hackers, we're certain that they'll put these additional funds to good use. We'd like to thank everyone who purchased the pack in support!

Moreover, the Vigor team has been steadily posting to social media, such as an interview with Lead Programmer Ondřej Martinák, a sneak peek of new character customization items, and the VOD of the last developer live stream. Follow Vigor on Twitter, Facebook, and Instagram for more development updates and behind-the-scenes content. 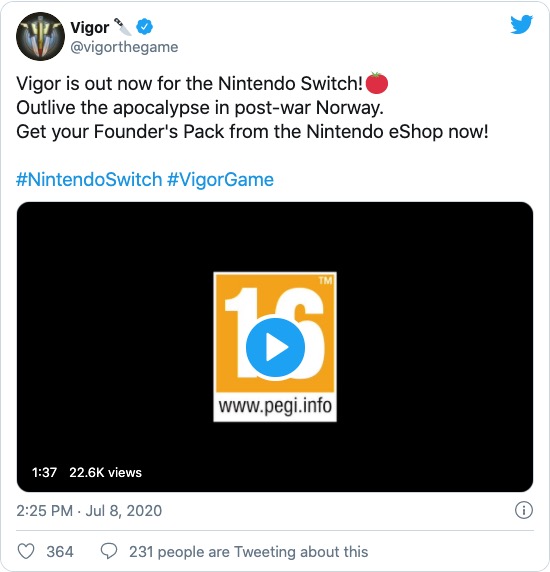 Summer or not, July was a very busy month for the Ylands team. After announcing Goodie Packs, which we also covered in June's Bohemia Recap, they released the very first Goodie Pack on July 8th. It contained some pretty cool stuff, like the infamous Pineapple Grenade, the pump-action corn gun, and some amusing stickers for Creators to adorn their maps with. These Goodie Packs are supposed to be a small nod to the community, so they have something cool to play around with while they wait for the big awesome updates. We hope you'll enjoy those exploding pineapples!

But while the Goodie Pack was mainly for the Explorers out there, the Ylands team didn't forget about the game's beloved Creators. They've been working on some neat Editor improvements, like the ability to pivot your group or weld, the transformation of Custom Controls into its own Game Logic, and adding the ability to import external spreadsheet data to a game. Many more Editor improvements are planned for update 1.4, but the community's suggestions remain most welcome. Swing by the game's forums if you wish to share any specific ideas.

Lastly, we've announced a new segment on the Ylands forums called "Naru's Corner". Here our in-house Editor genius, Naru, will talk every other week about an interesting feature or effect that he has created, with a step-by-step guide on how he did it. If you're looking for inspiration and Editor tips and tricks, this is the place, or rather corner to be! 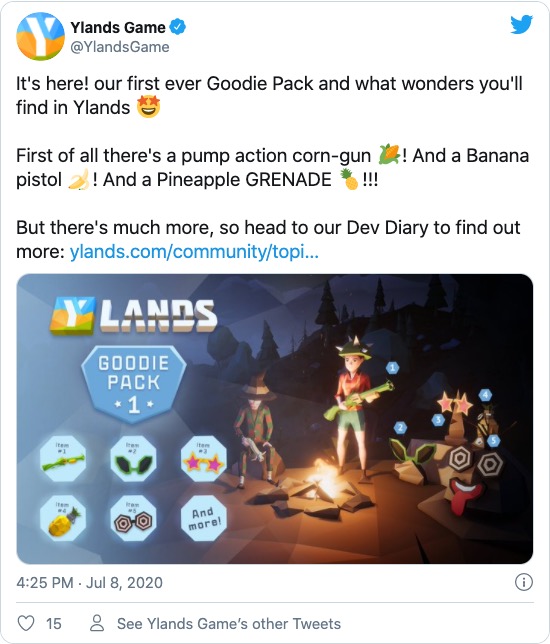 On the very last day of June, we released DayZ update 1.08 across PC and consoles. Since then, we've deployed three additional hotfix updates (changelogs are posted in this forum thread), mainly to address reported crashes related to the in-game bases that users can build. We also toned down sun glare after receiving feedback from players that it was too strong. Furthermore, we released a security update on PC just a few days ago. 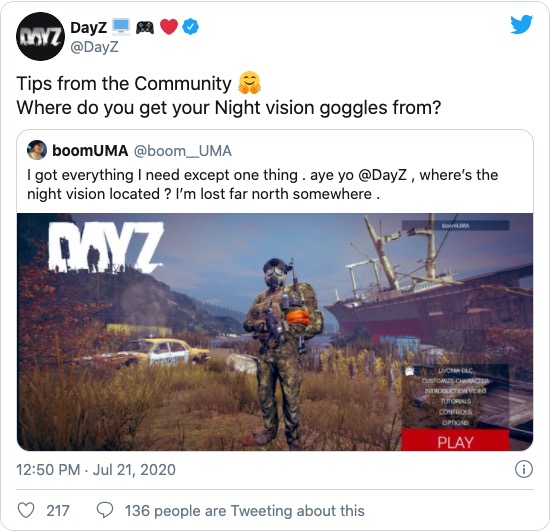 On July 16th, we had reached the submissions deadline for the Arma 3 Art of War contest. A big thanks to everyone participating! Our contest organizers will now be evaluating the entries, and selecting the winners. We plan to announce the results towards the end of August as well as share more information about the contents of the subsequent Arma 3 Art of War charity DLC.

Inspired by the contest's theme, Art of War Project Lead Scott Alsworth interviewed Professor Joanna Bourke – a celebrated historian and author of the book "War and Art", which is part of the contest prizes. It turned out to be a very insightful discussion on the purpose and function of art about war, and it's absolutely worth reading the full interview over on the Arma 3 website.

It also turned out that July was a popular month for releasing Arma 3 expansions, because we were celebrating the fourth anniversary of Arma 3 Apex on July 11th, and the 1-year anniversary of the Arma 3 Contact spin-off expansion on July 25th. To celebrate making first contact one year ago, we shared a video of an orchestral rendition of the expansion's main theme song (Transilience) on the Arma 3 social channels, which was recorded during Bohemia Interactive's 20-year anniversary celebration in December last year. 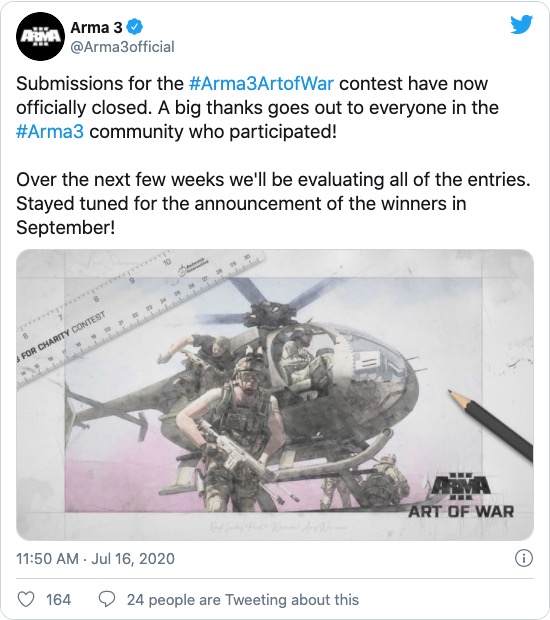 July was a big month for our much-anticipated sequel to Mini DayZ. At the start of July, we published its first gameplay footage, captured directly from the Mini DayZ 2 Alpha build. The 4-minute video should give a good impression of what to expect.

Internally, we've now started to extensively test the game. The development team even made a build available to all Bohemia colleagues so that they can join the 'bug hunt'. If you're not a Bohemia employee, but do own an iOS device and live in Canada, Scandinavia, the Philippines, Turkey, or the Czech Republic, then you'll be pleased to know that we're close to launching a so-called 'geo-beta' in those regions. This test version should remain available until we're ready for Mini DayZ 2's full worldwide release. Specific details are to be shared at a later date.

Meanwhile, the Mini DayZ 2 developers continue to share teasers of new content and features you'll find in the game, such as a new Light Machine Gun, and a special end game location that will require you to wear a Hazmat suit. Follow the game on Facebook and Twitter for more previews. 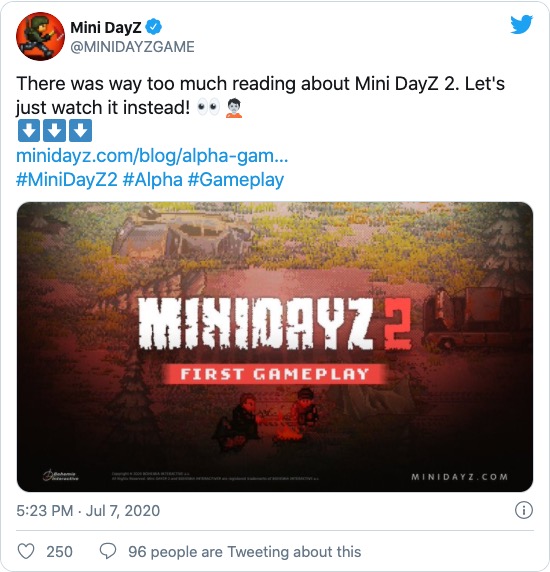 And, with that, you should be fully up to date on all public events that happened at Bohemia Interactive this past month. Be sure to follow us on Facebook, Twitter, Instagram, and LinkedIn so you're always the first to hear the latest Bohemia news. We wish you a great summer!